A 2020 Look at 3 Trends in Immuno-Oncology Biomarkers 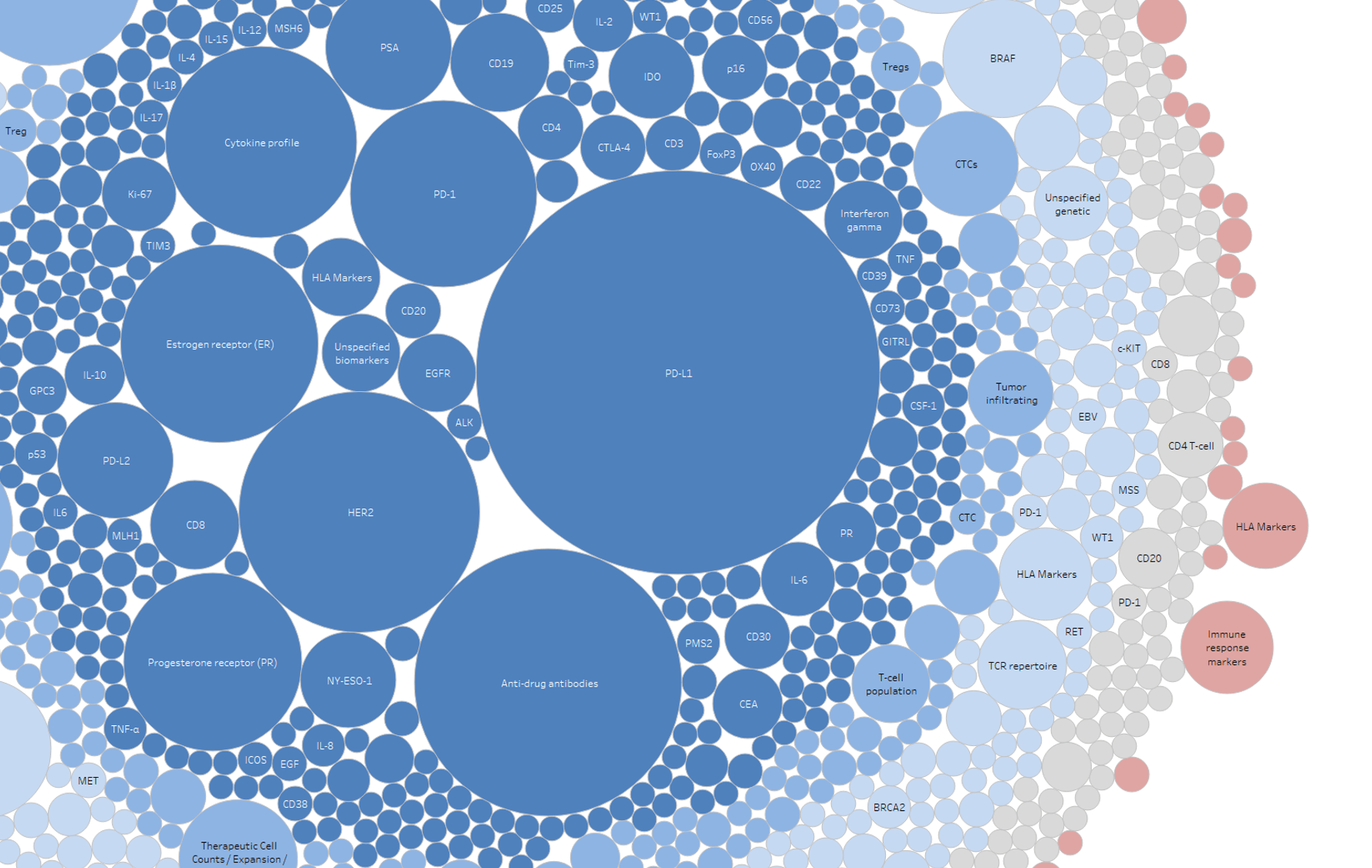 We recently added >300 new trials to our I/O biomarker clinical trial tracker, The I/O BioMAP, bringing our running total to ~2,700 studies, and providing new data that sheds light onto some of the latest trends in this space. From our analysis of these data, key trends we’ve identified include the stabilization of new trial starts, the dynamics of gene expression profiling (GEP) in trials, and the uptick in NGS containing studies.

Following the first wave of I/O approvals that came through in 2014, newly initiated I/O biomarker trials saw high double-digit growth rates through 2017. Starting late 2017, however, a new trend emerged; a plateau in the rate of newly enrolled studies in this space, with this flatline solidifying into 2019 as well.

Figure 1. Annual new trial counts of I/O Biomarker studies listed on clinicaltrials.gov; NOTE: These counts are based on a general search term used to identify studies for the I/O BioMAP and are not restricted to active-ongoing studies onlyWhile these data may prompt reactionary thoughts of a slowing market, understanding the realities of running these trials helps explain this trend. The patterns we see in new trial volumes are indicative of a maturing market in several respects, most notably in terms of approaching the maximum number of studies attainable with current patient populations. Leukemia / Lymphoma, Advanced Solid Tumors (AST), Lung Cancer, Breast Cancer, and Melanoma collectively account for nearly 60% of clinical trials in our database, and are the focus of many companies racing towards competing indications. To outline how finding eligible patients may be the cause of this study decline, data from SEER tells us that U.S. lung cancer prevalence is ~540K, with 57% of cases diagnosed as metastatic, totaling ~308K patients. The total enrollment volume across lung cancer trials in our database is ~85K, nearly 30% of the prevalent metastatic lung cancer population. As another example, from previous research we conducted on unmet needs in the precision medicine landscape, we identified that aggregate enrollment targets for newly initiated cancer trials in the U.S. have averaged ~500,000 patients annually over the past 3 years. This patient requirement corresponds to 25 – 30% of all newly diagnosed cancer patients in the U.S., and across cancer trials, enrollment rates range from 4-6% of cancer patients.When considering the multitude of other factors required to enroll eligible patients into studies (i.e. I/O naïve patients, patient proximity to test sites, patient willingness to participate in trials), what we see is a vastly reduced enrollment pool. Even before the decline in new trials was seen, the issue of insufficient patient volumes and overly restrictive enrollment criteria in new oncology trials drew broad attention (NY Times Coverage, Washington Post Coverage), but effective steps to address these are still to be seen. To see new growth in YoY trial volumes, this will need to be driven by changes in how we run trials, expansion of new indications beyond Stage IV cancer in treatment naïve patients, and improvements in how we actually recruit patients into trials.Broader Context and AnalysisAnother sign of industry maturation that helps explain the slowdown in new I/O biomarker studies are drug approvals in all-comer populations, regardless of biomarker status. Just this past year, Roche secured 1L approval for Tecentriq+chemo in 1L lung and Merck’s Keytruda+chemo won a 1L role in HNSCC, both without the need for PD-L1 selection. Established I/O drugs are demonstrating improvements over SoC chemo-radiation in key indications, drawing some focus away from biomarkers in select indications.The issue of identifying eligible patients and then executing interventional trials will become even more pronounced as biomarkers become increasingly integrated into the strategies of emerging I/O drugs. Additionally, they play a vital role in supporting new combo therapy regimens, especially in I/O-I/O doublets and triplets. Approaches like decentralized clinical trials or mobile-technology enabled studies are topics the Clinical Trials Transformation Initiative actively advocates for and are seen as key to expanding trial capabilities; solutions in this space are being pursued by multiple companies with the hope of making studies available to patients regardless of proximity to AMCs or urban centers.

Trend 2. High Hopes for GEP, But Where is it Going?

Much like PD-L1, GEP entered the I/O biomarker arena early in the history of immunotherapies and saw rapid growth following the initial checkpoint drug approvals. Much like the broader trend seen in new I/O studies, GEP-containing trials also faced a plateau then steady decline in newly initiated studies from 2017 on. This dynamic can be seen in Figure 2; notably between 2017-2019, there was a ~44% decrease in new GEP trial volumes.

Figure 2. Annual new mentions of GEP distributed by biomarker purposeAnother important trend we saw from these data is a shift in the purpose of GEP as a marker. After first spiking in 2015, nearly 70% of GEP mentions were for predicting therapy response or as an inclusion criteria metric (i.e. CDx applications). Since then, not only have we not seen new mentions of GEP as a criterion for prospective trial inclusion, but we have also seen a notable increase in the volume of recent trials using GEP for monitoring applications.

Figure 3. Running total of GEP mentions in trials distributed by biomarker purpose; 180 trials totalAs seen in the running total of GEP studies (Figure 3), the fastest-growing GEP developments are around use of this marker for immune monitoring (11.8% 2-yr CQGR) followed by Therapy Response Monitoring (8.3% 2-yr CQGR). Using gene expression for immune subtyping opens the doors to increasingly complex characterization of the tumor microenvironment, especially given the unlimited plex-level and hypothesis-free characterization enabled by RNA-Seq.Broader Context and AnalysisWhile this trend in decreased GEP use for predicting therapy response might be viewed as a sign these signatures were not effective as CDx tests, this was ironically not the case. In 2017, both Roche and Merck presented positive correlative data between GEP and response to PD-1/L1 blockade; Roche shared data on their T-Effector signature at ESMO 2017 and Merck published on the pan-cancer predictive value of the 18-gene Tumor Inflammation Signature (TIS). Despite these positive findings in late-stage trials, both companies have had notably less activity with these signatures post-2017, and have instead prioritized registrations with PD-L1-IHC. Furthermore, when considering that PD-L1 and early-GEP signatures have been seen as parallel predictors to checkpoint blockade, justifying the greater complexity and higher cost of GEP has been difficult for some I/O developers.In parallel with the shift in GEP from predictive towards monitoring applications, top pharma GEP developers have published on new signature classes. From SITC 2019, BMS presented on GEP based proxies for CD8+ T Cell infiltration, and Merck explored 10 new GEP signatures intended to characterize tumor biology and TME features across 9 mid-late stage trials. Additionally, the unique insights enabled by spatial-transcriptomics are an especially exciting field, and a cornerstone of the recent AGBT conference.

Trend 3. Riding the NGS Wave Into The Clinical Setting

Here at DeciBio, we’re not strangers to highlighting the transformative potential of NGS at all stages of the clinical landscape (blog 1, blog 2, blog 3). We also maintain a report on the entire NGS market, which we expect to see growing 14% annually to $6.5B by 2022, with nearly a quarter of this growth expected to be driven by clinical oncology diagnostics. To see how this expanded market may be reached in just 2 years, we can look to trial designs and the pipeline of applications that will further establish NGS in the clinic.To date, ~12% of trials in our database explicitly include NGS use in their trial designs, with this technology seeing the highest rate of new study inclusion (~8% 2-yr CQGR) compared to others (i.e. IHC, PCR). Important to note, however, is that the underlying technology is unspecified in ~70% of studies that include nucleic acid markers (N = 1,250 trials), indicating that NGS may already command a much larger share of the I/O biomarker trial market.When evaluating the actual markers being explored with NGS (Figure 4), established mutation profiling and gene expression-based measures each play a large role (~14% each of NGS mentions). We also see the introduction of new markers solely enabled by this technology, notably TMB and TCR repertoire profiling, highlighting the role this technology plays in supporting legacy biomarkers while also expanding the menu of what is detectable from a given sample.

Figure 4. Running total of NGS mentions in trials distributed by biomarker purpose; 324 trials totalNot only is NGS outpacing other technologies in new trial inclusion, but it is doing so while rapidly being established as a standard for inclusion / exclusion criteria as well. Of the technologies we track, NGS is growing the fastest as the means of measuring inclusion / exclusion markers for enrollment, and prospective inclusion of this tech to identify eligible patients is a strong indication of practice-changing submissions these trials may enable.Broader Context and AnalysisNGS’s versatility for both hypothesis-free, data-intensive exploration via WTS/WES and for hypothesis-driven targeted panel testing positions it as a versatile tool with demonstrated value for stakeholders at all stages of the clinical value chain. One would be hard-pressed to find a clinical expert who doesn’t think that NGS will play an increasingly important role in the I/O space, but there is plenty of debate as to how this technology will be routinely employed. Some of the key questions that will help shape NGS’s future in the I/O space include:

With the rise in real-world data aggregation and analysis, it is fair to assume that biomarker assessment is now a given in clinical research regardless of explicit mentions on clinicaltrials.gov. Samples matched to patient outcomes have become a highly valued market, and technologies such as NGS and matching of blood + tissue open doors to retrospective biomarker identification that could greatly accelerate the rate of new markers entering the clinic.Interested in learning more about our I/O BioMAP Data Tool? You can check-out more on a website and request a demo as well!